A leading light in the Neurological Scientific Research field required to enable the scientific and clinical work needed to end the permanence of SCI is Prof. Geoff Raisman. Prof. Raisman's research work inspired P-A to alter his perception for his future.

After P-A died due to issues related to his care management, P-A's family wanted to help make repair available for the overall benefit of UK Society & especially victims of this devastating and debilitating injury by setting up Trust PA Spinal Injury in Paul-André's (P-A's) memory. 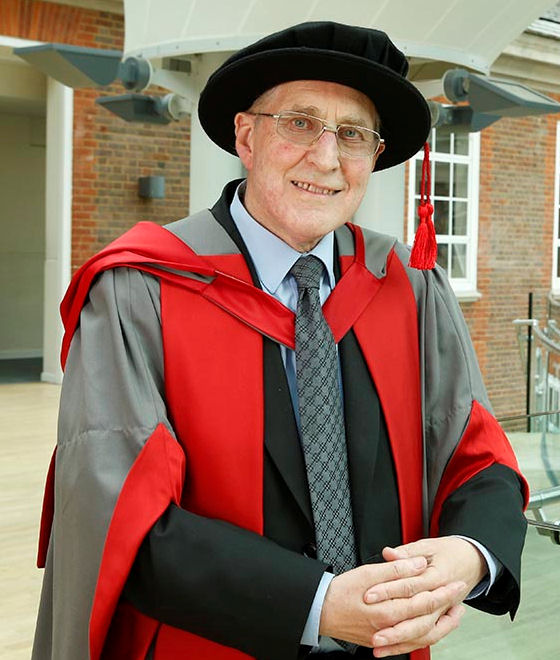 Prof Geoff Raisman is acknowledged by Middlesex University for his commitment & scientific progress.

Professor Geoffrey Raisman, founded the Spinal Repair Unit at the UCL Institute of Neurology in London.  He is Chair of Neural Regeneration at UCL, and received the award at the Middlesex University's graduation ceremony on Thursday 16 July 2015. Prof Raisman led the team that developed a pioneering cell transplantation treatment that enabled the first man to walk after surgery.

Professor Raisman, who worked for over 40 years on his research, is recognised for his work demonstrating the ability of the brain to restore connections lost after injury, for which he introduced the term 'plasticity' in 1969. He and his team recently used the technique developed using specialist cells from the nose, called olfactory ensheathing cells (OECs), in the spinal cord to treat a man paralysed from the chest down following a knife attack to allow him to walk again using a frame.

Speaking about his honorary degree Geoffrey said: "A lifetime of research has gone into the question of repairing spinal cord injury.  Now that we have the first patient able to get out of a wheelchair, it is a great and unexpected honour and privilege that Middlesex University honours this with a degree.

It was only after hearing about Prof Raisman's scientific research work from his older brother Steve, that Paul-André became inspire to fight for his future recovery.  In 1997 Prof. Raisman successfully showed that olfactory ensheathing cells (OEC’s) could be used to treat spinal injuries in rats. He has spent the past decade developing OEC spinal repair techniques for patients.

Paul-André had been recently injured so was in hospital totally paralysed from the chin down and fully dependant on an electro mechanical machine to breathe for him. So in memory of Paul-André  (P-A) plus this initial inspiration from Geoff Raisman’s work, we continue to support and help to fund the progress towards the eventual repair of paralysis being made available to end the permanence of spinal cord injury (SCI) paralysis.

A major breakthrough has occurred –

This remarkable event was featured on BBC Panorama To Walk Again (also on BBC IPlayer).

Through cell transplantation surgery, followed by intensive rehabilitation over a period of more than two years, the scientists that the supporters of Trust PA Spinal Injury have helped to fund have been able to restore assisted walking and some sensation to one patient.

A man who was paralysed from the chest down after a knife attack in 2010 can now ride an adapted tricycle.

In 2014, surgeons in Poland under the guidance of UK Prof. Geoff Raisman shared the news that they had reversed Darek Fidyka's paralysis using cells taken from his nose to repair his spinal cord.

The former fireman says he has noticed a gradual return of feeling and muscle control below his injury. The surgical team are now launching a search for two more paralysed patients who they will try to help walk again.

Mr Fidyka said: "I can tell that sensation is coming back and I am getting stronger. A year ago I would not have been able to ride a tricycle. Now I can feel each muscle and each press of the foot on the pedals."

The approach in Poland aim was to reconnect the brain with the lower limbs along the neural superhighway that is the spinal cord, enabling both motor control commands to travel down the body and sensation to travel up.

Darek Fidyka's spinal cord had been almost completely severed as a result of a knife attack, apart from a thin thread of external connective tissue and prior to the transplant he had no feeling or control below his injury.

Now he has had to re-learn how to control his muscles and interpret sensations. He said: "I realise how important the brain is while cycling, and that thinking is more tiring than the exercise itself."

But the results from one patient, however impressive, would never be sufficient evidence on which to base a new approach to spinal cord injury.

The forthcoming trial in Poland will be crucial if the wider scientific community is to be convinced that a patient's own cells can be used to regenerate their spinal cord.

It is also worth stressing that the patients selected will have to show enormous determination if they are to see the full benefits of the treatment.

At the moment, the above indications of improvement in bladder, bowel and sexual function are still being monitored and under investigation. There are encouraging signs, but the scientists cannot be certain at this point where these will lead in the long run.

There is no research as yet that suggests spinal injured people could make a complete recovery and return to their condition before the injury, but the latest breakthrough suggests their quality of life could be vastly improved.

The major loss of function in spinal cord injury is due to the severance of the long fibre tracts that carry impulses from the brain to control voluntary movement and bodily function back up to the brain to transmit sensation. Once they have been severed, these fibre tracts do not repair themselves. However, spinal injured people often show improvements with time and appropriate physiotherapy and rehabilitation. The degree of improvement differs greatly between patients but is hard to predict.

This improvement happens as a result of the repaired nerve fibres of the spinal cord “relearning and reorganising” the information travelling along the information highway, we know as the spinal cord linking the brain to our limbs for movement and sensation. It also includes our autonomic nervous system which is the pert of the nervous system that supplies the internal organs, including blood vessels, stomach, intestines, liver , kidneys, bladder, geniatals, lungs, pupils, heart and sweat, salivery and digestive glands without which we could not survive.

The following diagram shows the different nerve routes from the spinal column, verterbae level and spinal cord routing to the different parts of the body. When damage occurs at a specific vertebrae level the functions below the site of injury are affected and cease to work.

The following diagram shows what was done to enable Derak to make such great progress, which is ongoing.

The research that has been part funded by Trust PA attempts to restore bodily function over-and-above this “natural” recovery by actually repairing those damaged fibre tracts. This is done through a surgical procedure which transplants special cells (olfactory ensheathing cells) from the patient’s own olfactory system into the site of injury. These act as a “bridge” over which the damaged connections can grow back. So far this is showing remarkable promise which needs continued funding and further specially chosen injured subjects to be treated, monitored and tested.

We value the support of our friends to continue in raising the necessary funding to make this happen in the near future, to improve injured men, women & children. 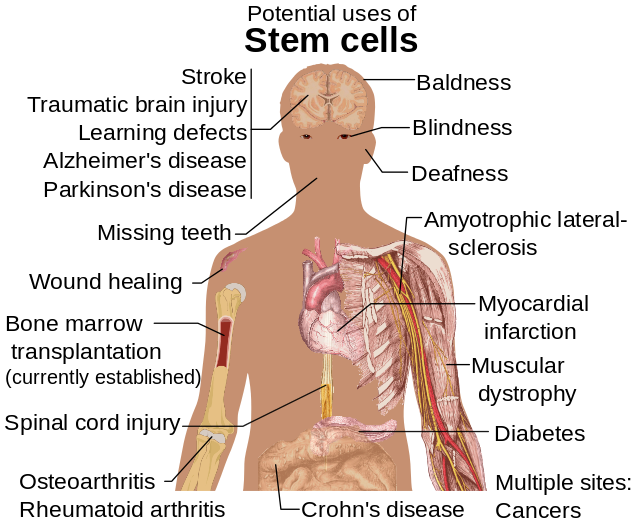 The results from this work will help to resolve many other central nervous problems including; Nerve Blindness, Nerve Deafness, Alzheimer’s and Parkinson’s disease.

We value your vitally important help, thank you in anticipation of your continued support.

Information sourced from:  NHS – WHO - BBC

Further Technical information about the process to enable SCI Repair:

Repair of Injuries to the Spinal Cord and Spinal Roots by Transplantation of Olfactory Ensheathing Cells:

Despite this sad situation - Prof. Raisman's Team will continue at The Spinal Repair Unit UCLondon to finish the important task Geoff started.

Geoffrey joined the Department of Brain Repair and Rehabilitation at the UCL Institute of Neurology in 2005 where he established a dedicated Spinal Repair Unit at Queen Square. Previously (1974 to 2004), Geoffrey was the Head of the Division of Neurobiology at the MRC National Institute for Medical Research in Mill Hill.

Geoffrey received numerous prizes and awards, including the Wakeman Award for Research in Neurosciences (1980), the British Neuroscience Association Award for Outstanding Contribution to British Neuroscience (2004), and the Reeve-Irvine Medal (2005) for critical contributions to promoting repair of the damaged spinal cord and recovery of function. His team discovered that olfactory ensheathing cells (OECs) can help guide regeneration of nerve fibres. Together with Professor Ying Li and Dr Daqing Li, the team has shown that transplantation of these cells into spinal cord injuries in laboratory models results in regeneration of severed nerve fibres and restoration of function. The team is now working on the practical steps needed to apply this approach to spinal cord and optic nerve injury.

Geoffrey was an inspiration to the many colleagues and students that he worked with. He was a truly exceptional and gifted person and his death represents a major loss to the neural regeneration research field and to UCL.

Our thoughts are with his wife and family.

"Geoffrey Raisman was a true pioneer of spinal cord injury science and a world leader in this area. He was deeply committed to translating his science to benefit patients. He leaves a lasting research legacy and a very active group continuing his work. We were all very proud to have him as a colleague at UCL and at the Institute of Neurology; he will be greatly missed." Professor Michael Hanna, Director of the UCL Institute of Neurology.

we are very sad to hear this tragic news as Geoff has been a key influence in our lives and the work of Trust PA Spinal Injury since 2001/2.

Geoff's work was a pivotal inspiration and hope to Paul-André (P-A) at a desperate stage for him after his SC Injury & chin down paralysis, aged just 26yrs.

It gave Paul-André the hope to fight for whatever future opportunity might result from Geoff's focus to bring him a better life.

P-A said he would give it till he was age forty, ironically in 2015 we heard of first man to walk again - P-A would have been 40!

That underlines for us, the importance of what Geoff' dedication has achieved!

We feel that the final solution of routine repair will now eventually happen, we know that is because of Geoff's dedicated work.

With continued enthusiasm Trust PA will help to finish the job by supporting Geoff's team - and importantly in memory of the two people that have influenced our lives so much.

Our heartfelt thoughts and very best wishes go the Geoff's wife and family at this difficult time.